My wife Naoko wrote a reply to this post. It was fun comparing how different the podcasts we listen to are. 🙂

First, I’d like to plug a podcast that I’m a semi-regular guest on, techsTalking(5417), a podcast where technology people just talk about whatever is on our mind.

Here are some other podcasts that I’m currently subscribed to:

A few other podcasts I listen to occasionally:

As you may know, I am a big PostgreSQL user and fan. I also use Homebrew to manage 3rd party software packages on my Mac. PostgreSQL 9.4 was just released a couple days ago with some really cool features — a binary-format JSON datatype for speed and flexibility (indexes on JSON keys? Of course.), and some really good performance improvements. Read the release blog post and release notes for more information.

However, if you’ve used PostgreSQL before, you know that upgrading can be a little difficult. Here’s what you have to do to upgrade your Homebrew-installed PostgreSQL 9.3 to 9.4. Keep in mind, these steps are for a standard Homebrew installation — as long as you haven’t configured custom data directory paths, it should work.

Note: If you’re using the pg gem for Rails, you should recompile: Personally, I’ve noticed quite a few speedups, and it seems like they’ve fixed a large memory problem I was running in to on pre-release staging environments:

I have been a proponent of pre-commit hooks for a very long time. After doing some searching, I found this lovely gem. It consists of a bunch of checks before you commit your code into the repository. A couple of my favorites:

And much more. Highly recommended!

Rails Turbolinks is pretty cool, right? I thought it would be pretty cool to use it on WordPress, too.

There are probably a lot of bugs, and it probably doesn’t work well with JavaScript-heavy sites. I’ve included the jQuery compatibility layer, but it’s still not perfect. Use at your own risk.

To install, just search the WordPress plugin repository for “turbolinks” I’ve been playing around with Vagrant recently. It really is a great tool for setting up development environments quickly and cleanly – no more local MySQL databases with 100 separate databases!

There are a few ways to solve this problem that many WordPress developers have:

I’m going to be talking about the last option, Vagrant, in this blog post. I’ll list out a few reasons why Vagrant was attractive to me in the first place:

Here’s what I came up with: vagrant-wp-theme-template.

It’s a template based on Underscores (_s), a template theme for WordPress themes. I’ve made two modifications: convert the CSS to SCSS, and the JavaScript to CoffeeScript. Grunt, an excellent automation tool, is used to compile the sources into CSS and JavaScript.

I’ve made the template compatible with _s, so just follow the instructions for _s regarding naming your theme, then the directions for getting your development environment set up. If you want to use an existing theme, just drop it inside the theme folder (and don’t forget to update the name in the Vagrantfile!)

Finally, this wouldn’t have been possible without the help of @miya0001‘s vagrant-chef-centos-wordpress, which this template is built off of. Thanks!

If you aren’t familiar with Marshal.dump and Marshal.load, you probably should be. It’s used to serialize Ruby objects into binary data – mostly caching.

Now, if you’re trying to implement a Russian-doll caching system with objects, you probably have run into the issue of eager-loading associations using #includes not being cached.

So, I wrote a quick module to make Marshal.dump and Marshal.load dump and load the association data, as well.

NB: This hack works with Rails 4, but I haven’t tried it on any other versions. YMMV.

I’ve come across too many Rails apps with the secret_token in version control. Don’t do that.

There have been more than a few times where someone needs to send a big file to me. So, I made a quick and dirty tool to allow anyone to upload files directly to a S3 bucket.

No more shuffling links around, worrying about them expiring, and wondering whether the data stored is safe or not. 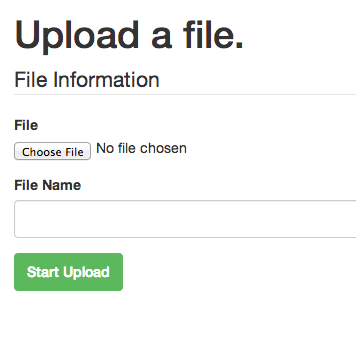