I recently released my first app on the Mac App Store, Toki, and I decided that talking about the inner workings of the sync mechanism I’m using would not only be interesting, but helpful for me to think about some of the problems I’m having[footnote]This is inspired by the “Vesper Sync Diary” series of blog posts by Brent Simmons[/footnote].

Toki uses an App.net sync mechanism that I’ve been thinking about and working on for a while — I thought that Toki would be a good low-profile app to test out some ideas in real-world use.

Although Toki is a production app, the sync portion is not feature-complete yet. I’m working on ironing out the basic bugs (planned to be released in 1.0.1 and 1.0.2 releases), before moving on to the more advanced features. My “end goal” for the App.net sync mechanism is an open-source multi-platform library that anyone can use in their own app to use the App.net backend to keep their objects synchronized[footnote]There already has been some work been done with a Ruby-based command-line client.[/footnote]. From now on (and until I think of a better name), I will call this sync mechanism “App.net Object Sync” or “ADNOS”.

ADNOS uses the private message / channel feature of the App.net API, using a channel for the app namespace, and a message representing each object.

There are two fundamental steps of the sync protocol (as of version 1.0.2, still in development):

These limits are pretty much unavoidable. I work around the rate-limiting problem by queueing sync up requests, and pausing the queue when X-RateLimit-Remaining gets dangerously low. The queue is re-started after X-RateLimit-Reset elapses. Any app that plans on using ADNOS will want to be aware of these limitations before implementing it.

And, now for the features I’m planning on implementing (in no particular order):

I’ll be writing more as I progress. I hope to get some sort of open-source library out there in the near future.

I noticed that most of the good discussion I was having about blog posts were on App.net. Turns out, many other people feel the same way, and there’s even an official App.net comments widget!

I’ve been testing a WordPress plugin to replace the default WordPress comments with ADN comments on this site for quite a while, so I decided to publish it in the WordPress Plugin Directory. Just search for “ADN Comments”, and it should be the first result.

Installing this plugin will completely replace WordPress comments. You won’t even be able to see them from the admin dashboard — the data is still there, but just hidden. If you don’t like ADN Comments, just disable the plugin and all your old comments will reappear.

If you’d like to display your username as the default “reply-to” username, please set your App.net username in the “Contact Info” section of your profile. 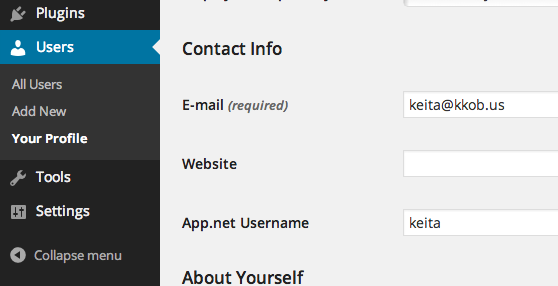 Source code is available under the GPLv2 (or later) license. Code contributions, bug reports, etc, are welcome at the GitHub repository.

I’m sure you have heard of App.net by now. The paid, non-advertisement-supported “live social stream” (read: Twitter). They set a $500,000 goal, and raised more than $800,000 – a clear indicator that some level of demand is there for such a service.

There are two levels of membership, the $50 “User” level and the $100 “Developer” level. A developer account will give you the necessary API keys to build apps that connect to App.net. I was very interested in how these prices were chosen, and thankfully App.net published their logic (“How did you come up with the pricing tiers?” in the FAQ).

I agree with Marco Arment that $50 a year is too expensive for regular users, but he didn’t have anything to say about the developer tier. Here’s an excerpt from the FAQ that irks me:

The developer price is inspired by the amount charged by the Apple Developer Program, $99. We think this demonstrates that developers are willing to pay for access to a high quality development platform.

The decision using the Apple iOS Developer Program as inspiration for the App.net developer tier is, I believe, fundamentally flawed – there are too many differences and not enough parallels:

For App.net to convincingly (using their present argument) charge $99 for their developer tier, I believe that the following services are necessary:

Of course, if you believe that App.net will balloon, the developer tier is moderately priced. Otherwise, it’s just another lucrative investment.